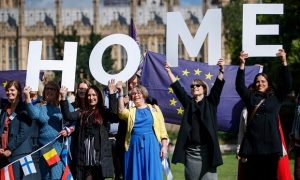 With the possibility of Britain leaving the EU having not reached an exit deal, the rights of EU citizens living in the UK and Britons living in other EU member states has been called into question again.

Dominic Grieve, the Conservative MP and former attorney general, has called for an urgent side-deal on EU citizens’ rights post-Brexit to secure their future in the event Britain crashes out of the bloc without an agreement with Brussels.

Although both EU and UK leaders have tried to reassure EU citizens on both sides of the channel that their future rights will be secured, there was an overwhelming sense of fear and uncertainty among those gathered at the Emmanuel Centre in Westminster.